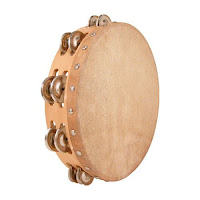 One Saturday night, as he lay in bed, Mr. Arthur couldn’t stop thinking about the music at my dad’s church. Something was missing. Something was not complete. There needed to be something extra. More flair. So the next morning, to the horror of all present at the 9:00 service, Mr. Arthur got out of his seat and walked up to the front of the sanctuary. With a look of purpose, this 80 year old World War II veteran stood beside the guitar player during the middle of a worship song. He then proceeded to bang away on a tambourine he brought from home.

Even though that’s an extreme example and we eventually talked Mr. Arthur down from the front because slow worship songs rarely have tambourine solos, sometimes we Christians get weird about music. Sometimes when someone tells us, “God really wants me to use my musical ability for the church” we overlook a complete lack of musical ability. I don’t know why, maybe we think to ourselves, “That guy sounds awful, but maybe God is hearing something I’m not.” So we let beginner guitar players take the stage, karaoke kings grab the mic and keyboard players that know a total of three songs, all of them Michael W. Smith, step in front of the crowd. One church I used to go to had a guy that was horrible at guitar but no one would tell him because they were afraid to hurt his feelings. So instead they just turned his speaker down lower and lower until you couldn’t hear him anymore and made him stand over on the corner of the stage away from the rest of the band. Which was far worse than telling him to go practice more.