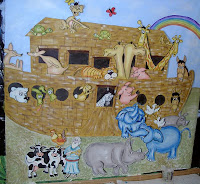 I think Bible story murals might be slowly dying. As much as we love them, I am starting to see them at less and less churches. The days of having Noah’s Ark painted on the walls of your area for kids is slowly giving way to more contemporary creative interpretations of the Bible. And I’m fine with that as long as someone will finally paint my idea for a mural. I am of course talking about the scene in 2 Kings when the prophet Elisha orders some bears to attack teenagers that called him bald.

That story is insane, but here’s how I envision the mural. Elisha is standing in the middle of all these angry, bald hating teenagers. He looks really enraged and the caption out of his mouth says, “Do you know where you are? You’re in the jungle baby! You’re gonna die!” And then in the corner of the mural are two huge bears with hockey sticks. I’m not sure why they have hockey sticks but it seems a little tougher to me.

That’s my idea, but so far churches are refusing to take me up on it.

p.s. I once wrote a touching piece called “You’re Lucky I Don’t Have Access to Bears.” It was essentially a threat that if I had access to bears I would “bear” everyone that cut me off in traffic.

Previous Post: « Thinking God Lost His "A" Game.
Next Post: Witnessing to people that don't believe in the Bible using the Bible. »