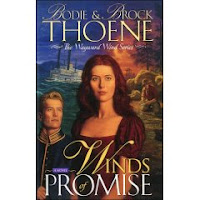 It is with great trembling that I write this post. Sure, Booty God Booty, was a little crazy and the whole “Jam of Solomon” with the T-Pain reference was out there, but this is the riskiest post I’ve ever written.

You see, my wife, like many of you, holds Francine Rivers and Brock and Bodie Thoene in high regard. And I am of course using the phrase “high regard” as a synonym for “considered slightly better writers than Paul.” So I can’t really criticize those authors and I’ve read their stuff and find it entertaining. Instead, I’ll tell you how I am going to write my Christian fiction novel:
First and foremost I am changing my name. I think I will change it to “Dalton” and will most likely grow a handlebar mustache. I just think “Dalton Acuff” sounds like someone that knows their way around a Christian fiction novel. Then I’ll create a character named “David Gideon Randelhouse.” I think the combination of two important biblical figures will let people know right off the bat, this guy Dalton doesn’t mess around. Then I’ll put him on a prairie somewhere and give him some impossible odds to beat. He’s losing the farm, his horse gets bit by a rattlesnake, there’s a new teacher in town teaching the kids crazy things, some bandits have stolen the church offering, the schoolhouse burns down and an orphan is found on the steps of town hall. All of that is happening in chapter one.
It’s going to be huge. Promise. I would tell you more, but since my wife will be reading this soon I better go get my spot on the couch ready for tonight, because that’s probably where I will be sleeping.
Previous Post: « Waiting on God
Next Post: A liberal use of exclamation points!!! »