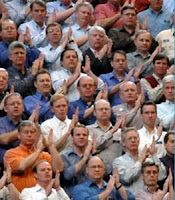 I took tap dancing in high school. And ballroom and tango and a variety of other dances. I thought about telling you that in Shrewsbury, Massachusetts, it was cool for Seniors in high school to take tap dancing, but who is going to believe that? I was and continue to be, a dork. Taking all those dance lessons however did give me an appreciation for rhythm. I wouldn’t necessarily say an understanding of it, but at least I can recognize it. Which is why I always cringe a little when a worship leader says, “Everybody clap together” at the beginning of a song.

Instead of marching forward in a united rhythm, what usually happens in church sounds like someone lit off a box of hand firecrackers. Smacks and slaps and claps just ringing out randomly with no sense of where the song is headed. So this morning, after witnessing several claps die merciless deaths yesterday at church, I thought I would analysis how the clap goes so wrong so quickly. Here is what I think happens, laid out in a convenient step by step approach:
1. We get the “call to arms.”
This is when the worship leader tells everyone in the crowd to start clapping. Often, he or she, will raise their hands above their head to give you a visual of how the whole thing is supposed to go down. It’s an exciting moment, the world is so fresh and new. We’re all a little intoxicated on the sense of potential and possibility. So together, we start clapping.
2. We realize that there’s no leader.
Eventually, the worship leader stops clapping above their head. Either they start playing an instrument or just grab their microphone in kind of a dramatic, Creed-like moment. Suddenly, we in the crowd realize no one is leading this clap-a-thon. We scan the stage for direction but no one bails us out. The main singer is focused on the song and the back up singers are doing some sort of rhythmic clapping that is beyond us. It’s like the Phd program of clapping. At least 15% of people quit clapping right here.
3. We’ll give you the first verse and that’s it.
Most people feel pretty generous if they clap for the entire verse. We won’t go the whole song, but at least we pitched in. It’s the equivalent of serving at church by stacking up chairs. You still feel like you gave something back to the church, but you didn’t have to interact with anyone or be overtly compassionate. 40% of people quit clapping here.
4. We find out the chorus is faster.
Whoa, whoa, whoa. Just when some of us have decided to clap for the second verse too, we run into a chorus that defies all logic. It’s suddenly faster than the verse was and we don’t know what to do. Do speed up our clapping too? Do we just stop clapping and pick back up on the second verse? Somebody, please, a little help. 20% of people quit here.
5. We run into a slow bridge.
This is the opposite of the chorus issue. Now you slow the song down and get a little emotional. And we’re clapping, loud and proud but suddenly it’s quiet and we’re the one guy banging away on our hands while you whisper, “the blood of Jesus.” This is no good. 10% of people quit here.
6. We finish the song.
At last this crazy ride is over, the clapping is done. We’re finished and can feel good about what we have accomplished. But just know, if you’re going to ask us to clap on another song, about 50% of us are just going to flat out refuse. We’re all clapped out.
That’s what we’re feeling in the audience. I trust that any worship leaders reading this will let us know how they feel. Do you notice I’ve stopped clapping? Do you care that I’ve stopped clapping? Do you talk about how bad my clapping is when you get together with other worship leaders to play racquetball?
Previous Post: « Printing bulletins on pen repelling paper.
Next Post: Email Forwards »