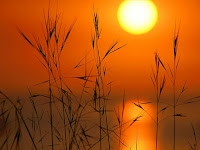 Why do we use these stock images so often? I think of it like going to the dentist. Have you ever had them give you “flavored” fluoride or Novocain? The options always sound delicious. It’s like you’re ordering from some sort of gelato menu. You can choose from pineapple, bubble gum, mint or regular. But you know what pineapple tastes like? Fluoride. You know what bubble gum tastes like? Fluoride. You can call it whatever flavor you want, but at the end of the day it’s still fluoride.

Same with sunsets and waterfalls and sunrises with worship lyrics on it. If you don’t want to sing the 47 choruses of “I could sing of your love forever,” you’re not going to be convinced by the waterfall. Although I have to confess, when my church bounces graphics in a way that makes them look like they are jumping from one screen to another I feel like they are doing magic. Seriously, I know it’s just a computer program but it looks like voodoo or something. I get hypnotized by that every time I see it.