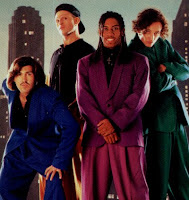 There are three ways to use a secular song in your service at church.

1. Pretend that the songwriter is singing about God and not his girlfriend.
2. Wait for a Christian band to cover it so it becomes socially acceptable.
3. Godify the lyrics so that they feel like a church song.

Number 3 is far and away my favorite method. Unfortunately, a lot of the churches I attend choose to take option 1 so I am often denied the delight of the third path. But that’s why I rely so much on people that read this site.

A girl recently emailed me and said that at her youth group, they used to sing a version of Naughty by Nature’s song, “OPP.” During the 90s, this song was massive. I didn’t love it as much as perhaps the vocal acrobatics of “Color Me Badd,” but it was still really popular. In the song, a young man extols his appreciation for a variety of body parts and romantic relationships in a way that is less than scriptural. He tops off the ballad with a chorus that contains the phrase “You down with O.P.P.?”

I’ll let you figure out what OPP stands for (don’t google it at work), but at my friend’s church they changed the lyrics to “you down with G.O.D.?” Instead of rapping a sexual, testosterone filled jumble of words, they cleaned it up a little and opened up youth group with the song.

That is fantastic. I personally wish someone would do that with Prince’s entire catalog. Just imagine the possibilities:

Those are silly, but I promise, the next time you hear any of those songs, in your head you’ll think, “She wore a raspberry tankini, the kind you find at a Christian bookstore.”

Previous Post: « Good enough for the church (or God's love letter to artists)
Next Post: Leaving room for the holy spirit when you dance. »