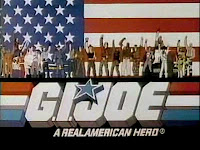 I’ve never been to seminary, so if they use a different cartoon from the 1980s to teach the differences between versions of the Bible, my bad. But when I sat down to write a post about how we like to represent and argue for our own brand of the Bible, I kept hearing the little Jon inside whispering, “yo Joe, yo Joe.”

So here it is, my explanation of the different versions of the Bible as told through the lens of GI Joe. I hope you’ll add to it since I was unable to work in key characters like Lady Jaye.
1. King James Version = Storm Shadow
When I was younger, I really wanted to be Storm Shadow. And by “younger” I mean last week. Seriously, he was just so cool. Storm Shadow was a ninja clad all in white that constantly battled the forces of good and evil within him. Yes, he worked for the bad guys Cobra, but deep inside he was pure. And my favorite thing was that he was unapologetically old school. He studied with these ninja masters in Japan and made his decisions based on a foundation of knowledge from thousands of years ago. That’s how I feel about the KJV of the Bible. It’s old school. Sure that makes it a little clunky, but so what? If you want to be a Christian ninja, I think you have to go the way of the KJV.
2. NIV = Flint
On the show, Flint wears a beret, but it looks cool. He’s the third in command and comes off as very approachable and accessible. He’s not trying to be the number one, he’s just walking through life as he sees it. Honestly, openly, it’s going to be alright. I feel the same way about the NIV or New International Version. The chief complaint I hear is that it’s not the most accurate version of the text. I think the NIV, much like Flint, is OK with that. I think at night when it’s playing Mario Kart with the other versions of the Bible it says, “Hey, I get it, I’m not as accurate as the ESV, but you know what? A lot of people read me. A lot of lives are changed by me, and that’s what it’s really about.”
3. Message = Wild Bill
Wild Bill was the crazy helicopter pilot on the show. He wore a vest and a huge mustache and was always saying crazy things that perfectly summed up the situation. Wild Bill could summarize in easy to understand language situations that all the other Joes needed to hear about. He wasn’t the only opinion that mattered, you still had to balance out his ideas with those of Flint and Duke, but he did have something valuable to say. Same with the Message. It’s a good read. It makes things easy to understand. Is it the only Bible I’d read? No. But it’s still a good one to have on board.
4. Amplified = Sgt. Slaughter
According to Bible Gateway, the Amplified Bible “attempts to take both word meaning and context into account in order to accurately translate the original text from one language into another.” According to me, the Amplified version is like Sgt. Slaughter. This GI Joe character is best suited to the Amplified Bible because he crossed over into professional wrestling as well. Much like taking the word meaning and the context into account, Sgt. Slaughter had a role in the cartoon and also body slammed people for the WWF (before it became the WWE).
5. NASB = Duke
On the show, Duke was the equivalent of apple pie and the American flag and down home values. While Flint was a little rougher around the edges, Duke bled red, white and blue. I feel the same thing about the New American Standard Bible. It puts a big emphasis on contemporary English and verbs and translating things into a smoother format. And it has the word “American” in the title, which is obviously a very American thing to do. Like Duke.
6. ESV = Snake Eyes
Clad all in black, Snake Eyes was the GI Joe version of Storm Shadow. He came from the same dojo, and there is no pain in that dojo, but he chose a life of helping the good guys. He had a cool red striped tattoo on his arm and never said a word, only adding to his mystique. He was old school too, but seemed more approachable than Storm Shadow. Same with the English Standard Version. I’ve heard it’s the most accurate translation, just what I’ve heard, but it still feels easier to read than the KJV.
7. New Versions = Random Characters
Right now, if you sell a lot of books, they’ll give you your very own version of the Bible. I don’t have a problem with that, but they all kind of run together for me, like the random bad guys on Cobra or random good guys on Joe. These are the secondary characters that are dressed all in blue or all in green and just fire lasers in the background. They don’t have any lines, but are still an important part of the battle. I feel the same way about niche Bibles. I doubt the John Maxell version of the Bible will ever overtake the NIV version, but it’s still a nice resource.
Wow, that was longer than I expected. But at least now you know, and … I can’t do it. I already made the joke, “knowing is half the battle” on another post.
Previous Post: « Narnia.
Next Post: Margin or life balance or what $3 gets you. »