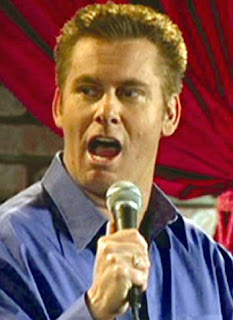 I’ve been asked to do a five minute stand up routine in a few weeks at a private event called,
Celebrate Life. I know what I’m going to do for my five minutes but I’m still kind of nervous that I’ll blank in front of 80 people or so and instead start talking about the best episodes of The Simpsons and Seinfeld. (Which by the way is the Monorail, Homer says while pointing at a family of possums living where a fire extinguisher should be, “I call the big one bitey,” and “The Hamptons” for Seinfeld. Don’t tell me it was Elaine dancing.)

The challenge with this particular routine is that it’s going to be performed in the middle of a lake on a houseboat. And I always see comedians tell jokes about the locations they are performing at, e.g. “you know what’s crazy about New York?” And I don’t know any good houseboat jokes. Plus, what if I tell one and someone from the crowd yells out, “A houseboat murdered my uncle, you jerk.” Or what if the houseboat sinks and like the orchestra playing music on the sinking Titanic, I am asked to tell jokes while everyone else gets off safely? It’s pretty easy to see that this gig is fraught with danger.

The greatest danger perhaps is that I might become a Christian Comedian. But I don’t really even know what that means. Do I have to tell Bible jokes like “Who has a short haircut, no eyes and two thumbs? This guy, if my name was Samson,” or the always delightful “A priest, a Levite and a Samaritan are walking down the road past a guy that was beat up …” Or maybe you just have to be like a Christian version of Seinfeld, “What’s the deal with communion? Is it bread? Is it a wafer? Is it possible to make it any drier in my throat? And why am I always so tempted to see how many of those little glasses I can stack on each other before they fall off? What is the deal with that?”

Maybe it’s not that bad. I know they have DVDs out and stuff like “Thou Shalt Laugh” and “Bananas Good Clean Christian Comedy” and “Yuks for Yahweh” but I have never seen any of those. (I made up one of those titles up.) Maybe, what the Christian community should do instead is elect an official comedian.
I nominate Brian Regan. I’ve seen him perform live four times, he doesn’t swear much and rarely do I need a plastic tarp to protect myself from some sort of melon he’s smashed with a giant mallet. Is he a Christian? I don’t know. Does he go to church? I don’t know. But when Ford becomes the “official vehicle of the Super Bowl” you don’t expect to see an F-150 truck lining up next to the running back on the field. I’m not saying we give him a scepter or anything but maybe just a sash that says “Official Comedian to the Christian Subculture.”
Something to think about.
Previous Post: « VBS- Extravaganza – Let's hear your ideas.
Next Post: Backsliding, a Christian thing or an Indiana Jones move? »