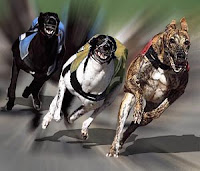 My brothers were in a fraternity at North Carolina State University. As with most fraternities, they had a charity they supported. Their particular organization was an old age home. One weekend, when they went to play cards and hang out with the citizens of the nursing home, they were met with a shocking new resident. Inside the home was a greyhound. And not just any greyhound, but a retired racing greyhound.

Greyhounds can run up to 45mph per hour or roughly 43mph more than the average 80-year old man. So when my brothers went into the house, they witnessed an awkward ballet between dog and senior citizen. The dog, who I believed was named “Murray,” was whipping through the house at lightning fast speeds. Through walkers and chairs and tables, Murray streaked, perhaps reliving his professional racing days.

At one point, Murry jumped six feet in the air and landed on top of a dresser in the corner of the room. A staff worker grabbed a broom and begin yelling, “Murray, get down!” while batting at the now invigorated animal.

When my brothers visited the home the next week, Murray was no longer there.

I’m all for greyhound rescue. I’m not sure though who was the genius that decided to combine the world’s fastest dog with the world’s slowest moving people. I think however that a similar thing happens in Vacation Bible School all the time. We take small children, who are like hummingbirds in their energetic movements, and combine them with elderly volunteers.

Aww great, Jon hates old people. Not at all. If anything, I love them and want to see them safe. That’s why I am proposing three ways we can even the playing field for them:

Ways to give old people a fighting chance at VBS:

1. Weighted clothing
Sometimes I watch a show called “the dog whisperer.” One of the dog whisperers tricks is to give dogs that have too much energy a job. For example, I once saw him put a vest on a dog that was weighted down with full water bottles. In addition to slowing the dog down with the weight of the vest, they gave the dog a sense of accomplishment as he completed a task. Maybe we could do the same with kids. Maybe the crazier five-year olds could wear weighted shoes when they come to VBS. That way they would be easier to catch and less slippery.

2. Sand
It’s really hard to run around on sand and since most VBS themes seem to be water related, why don’t we fill all the classrooms with sand? We can truck in a few tons of beach. I mean the janitors aren’t going to be very happy, but chances are they hate VBS anyway.

3. Blinders
They often make horses wear blinders so that they don’t get distracted and can focus on the right things. Would it be so bad to make some blinders for kids at VBS? We can put scripture on them and call them “Bible Blinders.” That way, instead of running around all crazy with old ladies chasing them, they can focus on what’s important at VBS, like eating glue.

As you know very well, I’m a huge fan of the old. In fact, I hope to one day be old myself. In the meantime, the least I can do is suggest we make kids wear weighted vests and horse-styled blinders. Seems about right.