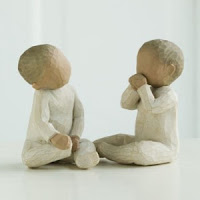 I’ve never been murdered but I thought I was going to be one night a while ago. I was asleep in my bed, probably dreaming of growing taller and dunking a basketball, when I heard a voice softly singing. I woke up and became instantly sweaty, which I think is my body’s only natural defense mechanism. It wasn’t either of my daughters, the voice was far too high pitched for them. It was sickly sweet, as if it were an adult trying to sing like a little girl. Worst of all, it was crackling and broken and full of static like one of those voice scramblers that all modern kidnappers seem to own these days. (Is it me or does every movie kidnapper shop at the same kidnap supply store?)

There it was, softly, potentially deadly, floating into my room, “Itsy, bitsy spider, went up the water spout, down came the rain and washed the spider out …”

It carried on for a few moments with me lying there in the dark, growing angry that my wife won’t let me sleep with a machete. I tried to imagine how I was going to fight this killer, who I was convinced would be wearing a red flannel shirt and unlaced brown work boots. Would I try to sweep the leg? Maybe a leg drop? A chair over the back? So many options. I sat there for a few minutes contemplating my next move. But once I had woken up a little, I realized the sound was coming from our bedside monitor, not the foot of my door. That’s why it sounded so crackly. And it wasn’t an ax murderer, it was baby Tad, a freakishly large stuffed animal frog that if rolled upon in the middle of the night, will just burst out in song.

That night scared me. I admit, I’m a wimp and got a little freaked out, but that’s nothing compared to how I feel when I see those “Willow Tree” figures Christians book stores sell. Those chill me to the core.
How come they don’t have features? How come they all look like they’ve had their noses smoothed away by some serial killer called “Mr. Sandpaper?” Honestly, I know I have seen horror movies where featureless people slowly hunt you. You can run, you can run as fast as you want, but they’re still coming. They’re still chasing and they always catch you even though they just walk with a slow plodding pace.
I don’t know where Willow Tree figures came from either. It almost feels like someone said, “Hey, let’s take those Precious Moments dolls, shave off their faces and carve them out of wood. That won’t be creepy, right?”
But it is, it is creepy. And if my wife ever gets some, I hope it’s OK if I sleep on your couch.
Lonesome Crick

In a thunder clap of hooves, Julieanne’s horses took off. Something had spooked them. A cat or a bird or anything, these were “Caillou horses” and they spooked easily. Dalton saw it when he looked up from his cup of coffee. Black. Just like his memories. With a fan sip, he finished the coffee and jumped up from his seat. With a leap that was majestic, he landed on the two horses, grabbing the bridle and pulling sharply. Julieanne screamed and fainted in the seat. Dalton patted the horses, now calm, and then walked back over to get another coffee.