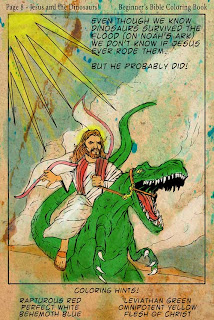 My friend, John W, sent me this the other day. I’m sure it’s traveled around the World Interweb for a while. It’s allegedly from the “Beginner’s Bible Coloring Book.” It’s hard to tell if it’s real, but there’s no question about whether it is awesome. Here are my favorite things about this picture:

1. The text reads, “Even though we know dinosaurs survived the flood (on Noah’s Ark) we don’t know if Jesus ever rode them. But He probably did!”

2. The colors they suggest you use to fill in the page are things like “Leviathan Green” and “Rapturous Red.”

3. The dinosaur kind of looks like he is yelling, as if Jesus had just said “Hi ho Rextacular!”

4. Let’s say Jesus did ride dinosaurs, what would he have named them? I mean would they be faith based names like “Loveodactyl” and “Fellowshipasaurus?”

5. Do you think the disciples had to ride less cool dinosaurs? Did Simon Peter ride the slower moving Triceratops for instance?

Is it real? I don’t really care. It’s real cool and if my wife let me get a tattoo this would probably be it. But only if I could figure out a way to work Storm Shadow from GI Joe into the picture.