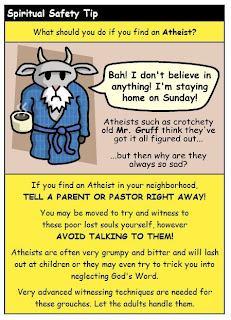 One of my favorite people at work is Tom. He’s funny and sarcastic and incredibly nice and an Atheist. I honestly was surprised at that when I first met him. I remember expressing my surprise to my wife as I described him. I guess I thought that every Atheist hated me or was out to get me or would make fun of me about Creation or I don’t know. I had spent most of my life in kind of a bubble and I think I had a really ignorant attitude about Atheists in general.

That’s horrible of me. God calls me to love people, not love types of people. Christ didn’t filter that definition when He told us what the most important commandment was. So why do I?

I think I approached Atheists like US Weekly magazine. US Weekly is kind of like a skankier version of People magazine. They don’t have articles really, just photos of celebrities. It’s kind of a guilty pleasure piece. One of the sections is titled “Just Like Us” in which they show candid photos of things like Brad Pitt taking out the garbage or Will Smith tying his shoes. The idea is that despite seeming like creatures from a different planet sometimes, celebrities are just like you and me.

I confess that I used to do something similar with my view of Atheists. I didn’t revere them like celebrities, but I certainly didn’t think they could be like me. I didn’t think they laughed at the same stuff I did or would want to hang out with me or were interested in a lot of the same things I was. But then I met Tom and he kind of screwed up my grossly unloving view of Atheists.

It turns out I am not the only one with an odd view of Atheists. The photo I attached is from the kids section of a Christian site. This is their Atheist character, Mr. Gruff, and the headline is “What should you do if you find an Atheist?” The copy continues, “Atheists such as crotchety old Mr. Gruff think they’ve got it all figured out, but then why are they always so sad?” I’ll let you read it on your own, but I can’t help but mention that it also says, “Atheists are often very grumpy and bitter and will lash out at children or they may even try to trick you into neglecting God’s word.”

That site isn’t a joke. Or at least the church that sent it to me thought it was real and so did I. I suppose characters like the “Kanga-Jew” might have been my first clue that it was indeed fake. Wow, hundreds of pages of content, fake advertisements from real Christian ministries, this is the deepest spoof I have ever seen. And bravo on completely fooling me and my friend Tom who didn’t seem that surprised to see something like this. (That might be the biggest lesson from all of this.) But goats and kangaroos aside, I was a jerk to Tom. I have sucked at loving people different than me and I hope that is an area of my heart the Lord continues to work on. I would love if Tom were a Christian, but he’s not. But that shouldn’t change the way I love him.

p.s. Do I feel dumb for thinking the site mentioned above was real at first? Yes and no. Yes, because I want you to think I am cool and smart. No, because I got an email from a foreign contact today and apparently I am going to be rich. I mean look what the email said, “I need your urgent assistance in transferring the sum of $10.3 million Immediately to your account. The money has been dormant for years in our Bank here without any body coming for it.I want to release the money to you as the nearest person to our deceased customer(the owner Of the account) who died a long with his supposed next of kin in an air Crash since July2000.”