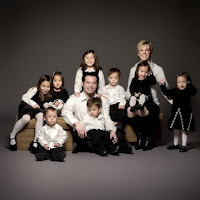 I want to be the Lil’ Wayne of Christian writers. Not the whole sex, guns, violence part of his rapping career. No, I want to be prolific and leak free writing on the web and do a million remixes of all my stuff. And do cameos in other people’s books.

But right now, everything I do is free so I can’t do that part of his career. I don’t know any other authors that want me to do a cameo and despite being prolific, I don’t know that anything I have ever written could be considered “leaked onto the Internet.” I mean I have a blog so it’s all Internet at this point.
So that leaves the remix.
I’m not in love with some of the early posts I put on this site. I don’t hate them, I just don’t think I did enough for a few topics. Some of the metaphors are a little cloudy, the sentences tend to ramble, there are basically all are the earmarks of someone trying to figure out their footing.
One post that I didn’t do justice was the one on the show Jon & Kate Plus 8. I only wrote a paragraph about it and based on how much my wife and loads of other Christian ladies like this Christian couple raising 8 kids, I don’t think that’s good. So today, despite the reader that passionately complained about Kate’s immodesty for wearing “shorts up to her butt on national TV,” I thought I would make like Timbaland and remix it. The original will still be up, but here is the new version. (The shorts comment was ridiculous by the way.)
Remix
Two weeks ago, my wife and I actually had an argument about the show, “Jon & Kate plus 8.” (If you haven’t seen it, the show is a reality program about a family of four that ended up having six babies all at once.)
I was reading before bed and she was flipping through the channels. Suddenly, the peace and quiet of the moment was spoiled by what seemed to be a veritable tornado of whining and screaming and toddlering. I looked up and sure enough, Jon and Kate were wrangling some kids on TV.
I volunteered to go into another room. My wife volunteered to say that was silly. We argued for a few minutes until we decided to compromise and both lose. We just turned the light off and went to bed. (We should have done what they did on “The Office” and had a win-win-win solution.)
I like Jon and Kate. Honestly, I think they do some really inspiring things with a very challenging situation. But I thought, like Bill Simmons from ESPN, it might be interesting to do a running diary of what goes through my head when I watch an episode of that show. You might be able to say, “Jon, you are crazy” or maybe even “I feel the exact same way when I see that.” Only time will tell.
What’s Inside My Head During Jon & Kate Plus 8
Minute 1
“I hope this isn’t a crying episode, where they just clip together 30 minutes of footage of kids crying. That is like getting a root canal before you try to fall asleep.”
Minute 3
“What does Jon do for a living now? Seriously, I know they are making some bank from this show, but what is his job? I can’t tell.”
Minute 7
“Is she mean to him? I know people say that, but I’m not sure I see it. Jenny and I have a rule not to have a serious conversation when the kids are on terror level red in the car since we become such jerks when they are stressing us out. If I had 8 kids they would probably change my name to ‘biggest grouch on the planet.’ I think Kate is fine to Jon.”
Minute 10
“He’s getting hair plugs donated from some company that watches the show and she got a tummy tuck. If I ever get famous, I hope someone will donate some ‘tall’ to me. I’m tired of being 5’7″ and would like to dunk.”
Minute 14
“I love that one of the little kids carries around a hard plastic alligator as her version of the special ‘blanket.’ I guess when you have 7 other kids competing for your stuff you have to pick something no one else would want. I would probably snuggle with a stapler.”
Minute 18
“Ha, one of the kids just hit the other one, turned around and saw the camera and then walked back over and hugged the kid she hit. I wonder what I would do differently if I had cameras following me all day?”
Minute 22
“If you’re a cameraman on this show, does being around so many kids make you want to have some of your own? Or is it like when I teach my younger brothers to wait on parenthood by calling them on the phone when my kids are screaming in the background?”
Minute 25
“I would pay one million dollars to see Mike Rowe from the show ‘Dirty Jobs’ run diaper duty for a few days with Jon and Kate. Is there anyone on television nicer than Mike Roe?”
Minute 27
“How come people get mad that they don’t show their faith enough? The show is edited. The producers don’t want this to turn into a happy happy Jesus show. I think there faith is displayed in beautiful, subtle ways.”
Minute 30
“If I ever got to interview Jon and Kate my wife would be really impressed. And if I was able to get Beth Moore to sit in on the interview, my wife’s head would probably explode with happiness.”
That’s what’s going on when I watch an episode of that show. Maybe you have similar thoughts. Maybe not. But expect a few more remixes in the future. I have more than 500 new ideas I have not written about yet for this site, but want to make sure that the early ideas I wrote initially are as cool as any of the others.
Previous Post: « The "please turn to" Bible race
Next Post: Torturing the janitor during VBS. »