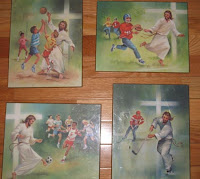 I admit, I occasionally like to imagine that Jesus and the disciples played ultimate Frisbee during the quieter moments of their ministry. If you’ve read this site for a while then you’ve seen me express my belief that Jesus had a great side arm throw, was more than willing to “lay out” for a long catch and was humble enough to not always walk on water to catch discs that were poorly thrown.

But was Jesus really an athlete? In the last few months I’ve seen action figures of him rock climbing, surfing and riding a bucking bronco. I thought they were funny. I can see the humor of Jesus grinding a rail and getting, as the kids say, “radical.”

When my friend Jessi sent me this photo from a flea market though, my laughter was replaced with confusion. The longer I looked at the paintings of Jesus playing hockey, basketball, soccer and football, the more questions I had.

1. Is Jesus blocking that kid’s shot in the basketball painting? He looks like he is concentrating intensely and is planning on sending that ball into the crowd in a fierce moment of rejection.

2. Is that kid throwing the basketball at the cross? I mean the hoop is off to the left and it looks like he is trying to score on the cross instead. Is that why Jesus is blocking it?
3. Would Jesus dunk? Would some sort of sick Shawn “The Reign Man” Kemp throw down glorify God’s awesomeness or be considered showboating? Is a layup more humble than a dunk?
4. Why is Jesus staring at the ball in the soccer picture? Great players don’t have to stare at the ball, it becomes like an extension of their feet. Is the artist saying that of the four sports, Jesus is least fantastic at soccer?
5. Why is Jesus wearing ice skates in the hockey painting? In the other three paintings he’s not wearing the right equipment. He doesn’t have a football helmet on, he’s playing soccer with a pair of open toed sandals. He doesn’t even wear a helmet in the hockey painting. So why would he need skates? If Jesus did play hockey, and we know he can walk on water, would he need skates to get around on frozen water?
6. Is Jesus handing that football off to the kid or asking for the ball? Probably handing it off, because he’s compassionate like that, but is a hand off the play you imagine Jesus orchestrating? I guess I’ve always thought of him more as a “hail Mary” long throw kind of guy.
7. If Jesus did score a touchdown, would he celebrate? Would he do some kind of dance like David returning from battle or be the type of player that quietly hands the ball to the ref with an attitude of “I’m Jesus, scoring touchdowns is what I do. I’m not going to act surprised or pretend it’s my first time.”
I still think Frisbee is God’s favorite sport, but looking at these paintings makes me think I might be wrong about Jesus. Maybe instead of Frisbee he’s a hockey fan after all.
Previous Post: « Homeschooling
Next Post: Thinking God is far away. »