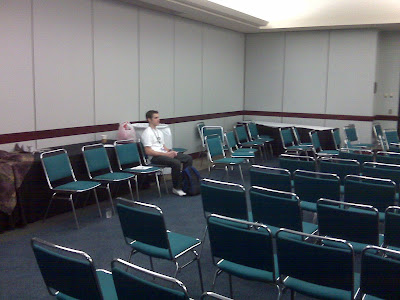 This was taken tonight at the Stuff Christians Like “meet and greet.” I think you could call it, “lightly attended.”

I would love to hear your caption ideas for this photo.

“Having just barely missed the Fire Marshall’s maximum capacity, a young man decided to sit down with an enormous bag of Skittles.”

p.s. the captions you’re writing are hilarious. Please keep it up. Maybe I’ll make a motivational poster. I’ll write more about it later maybe but there were two folks that came on their own and two recruited, so including me and my friend Jeff there were 6 total. Which in a weird way ended up being pretty perfect. I had a music themed post planned for today but I think the comments you’re leaving are far too funny to cover up with another post. So let’s play the caption game today and I’ll move the music themed post to Saturday.