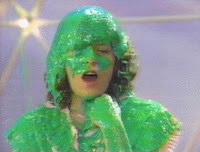 (Dave Ramsey mentioned that this is something people do during his speech at Catalyst last week and I remembered that I had done a woefully inadequate job with my original post. I thought it might be a good time to remix this topic.)

We’ve all either heard somebody do this or done this ourselves. In the middle of a prayer circle, someone will raise their hand with a prayer request and then proceed to gossip about somebody else. Usually it sounds like this:

“I want to lift my friends Charlie and Sandra up. Sandra caught Charlie looking at pornography online and he yelled at her for running up all their credit cards. And you know their son got kicked out of school for getting drunk and doing the African Anteater Dance from the movie ‘Can’t Buy Me Love’ at the homecoming dance. So I really just want to pray for them.”

It’s completely bogus and I’m sure that when God hears stuff like that He wants to throw a lightning bolt down at us, and not just a regular one, some sort of super lightning bolt coated with tigers and switchblades. But what do you do when someone in your small group disguise gossip as prayer? I offer you three solutions:

1. Hit them with a plank.
I know, that sounds violent. Beating someone with a 2 x 4 piece of wood about the head, neck and shoulders seems aggressive at first, but hear me out. I think when a new small group is forming one of the things they should do is make a “please stop gossiping” plank. They can decorate it and paint it and make designing it a communal activity like fraternities and the paddles they have. Then, at the start of each prayer circle, just lay the “please stop gossiping” plank in the middle. The moment someone starts going down that path, the first person to grab the plank gets to hit them. They can’t act surprised because they helped design the plank and if they get indignant just bust out the “splinter in my eye, plank upside yo’ head” Bible verse.

2. Drop a bucket of gossip goo.
I grew up watching the Nickelodeon show, “You can’t do that on television.” My favorite part was when one of the characters would say, “I don’t know” and get a bucket of slime dropped on their head. I propose that we employ a similar technique to eliminate prayer gossip (Prassip? Gossyer?). Let’s mix rotten bananas, Grape Nuts cereal and roughly four pounds of goldfish crackers together with some hot pink food coloring. Then, we’ll keep a bucket of “gossip goo” on hand whenever we pray. As soon as we sense some prayer gossip we can grab the bucket and get our goo on.

3. Say, “this is about you, isn’t it?”
The fastest, easiest way to punch prayer gossip in the mouth without actually punching someone in the mouth is to say, “This is about you, isn’t it?” Just pretend that you think the horrible things your friend is gossiping about are actually true of the person saying them. Keep saying, “This is about you, isn’t it? I mean come on, ‘I have a friend named Frank that met a girl online in the Niagara Falls area and she stole his identity,’ that’s you right? Someone stole your social security card and is living it up, looking at big waterfalls and spending your cash.” Eventually your gossiping friend will grow tired of your shenanigans and will say something like, “Stop! It’s not about me, I would never do something like that. That’s horrible.” At which point you can say, “Aha. You’re right. Those are horrible things and you’re telling us horrible things about your friends. In Proverbs 6, on the list of things God hates, gossip is listed with murder. Murder! A pox on you and your kin.”

Alright, you should probably leave out that last line about the “pox.” It’s not that compassionate and I probably just threw it in there because I wanted to make it seem like I regularly read Shakespeare. But if you do have a friend that still refuses to learn, just re-goo them or keep the “please stop gossiping” plank nearby. You’re going to need it.

Previous Post: « Me, Seth Godin and Pete Wilson at Catalyst.
Next Post: The world's largest side hug photo. »