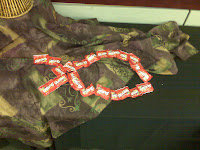 Last Wednesday’s Stuff Christians Like “meet and greet” was not what you could call a smash success. My in-laws printed up 1,000 SCL stickers for me to hand out, I carried about 12 pounds of Skittles around like some sort of candied camel and shoved more than 100 copies of the SCL SAT in my backpack.

I’m not a mathematician but I would say I have approximately 970 stickers left, enough Skittles to feed a small army and 99 quizzes left over.

The funny thing is that the whole experience was pretty convicting. I mean it’s easy to challenge ministers to not “round up attendance for God” or “focus on being a mega church,” but when you arrange a pattern of Skittles in the shape of an Ichthus on a table and only a handful of people come to partake in that Skittle Ichthus, you have to honestly wrestle with what your expectations for the whole event were. You have to be open to learning some empty room lessons. Here are three things I learned:

1. God is into filling hearts, not rooms.
Even though that sounds like something your Aunt would knit on a quilt that hangs on the wall in the back bedroom you have to sleep in when you come to visit, I think it’s true. In fact, I felt like God reminded me of this in a pretty loud way. Does God love big crowds and stadiums full of people? Without a doubt. I think He goes crazy when he sees a crowd of people worshiping him with everything they have. But first and foremost, He cares about our hearts. That’s what He wants to fill.

2. God is into numbers, but not the ones we think.
I tried to define success with a certain attendance number. I estimated a massive number because my ego got caught up in it and I thought God was about big numbers too. And He is, just His number is different than mine. His number is “1.” Not 100. Not 1,000,000, but 1. He cares about the individual. He wants to reach 1 person. You. Me. Your dad. Your mom. That weird guy you work with. He has 1 person in mind. And I forgot that.

3. You guys are awesome.
I can’t say that enough. The comments you left for the post, “caption this photo” were simply amazing. They were funny and encouraging and just flat out awesome. (A personal favorite was “I’m thinking we won’t need the wide-angle for the side-hug thing.”) I consider it a great privilege to be a part of the Stuff Christians Like community and that you guys commented more than 200 times really surprised me.

I don’t have a clever wrap up to my empty room lessons. In fact this post feels a little like the “very serious episode of Saved by the Bell” when Jessie Spano took too many caffeine pills and couldn’t stop singing the Pointer Sisters’ song “I’m so excited” until Zack had to have a tearful intervention with her. But what can I say? I’m excited and I want you to know that I’m going to focus on filling hearts not rooms, writing for one person at a time and telling you thank you.