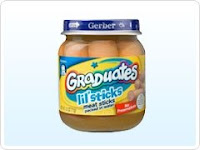 Even though I’ve never gone to seminary, I have a sneaking suspicion that one of the classes budding youth ministers take is “Gross Food Games 101.”

I say this because every youth minister I’ve ever known possessed at least one gross food game they’d play at youth group. Here’s what I imagine the class they took is like whenever I play, “magical seminary in Jon’s head.”

Professor:
“Class is going well. You’ve learned a few key youth group laws. There has to be a cry fest on the last night of a retreat. Saturday night is always “sloppy agape.” Parental releases are like little slips of gold. Treasure them. Now I think it’s time to talk about working some food humor into your ministry.

And by food humor, I of course mean, getting someone to puke. Nothing bonds you faster and tighter to the deep truth of sweet baby Jesus than someone puking during the middle of youth group. It’s unbelievable.

I’m a proponent of the ‘bag o’ baby food game’ myself. Here’s what you’re going to do and please write this down because I’m not going to repeat it. Get a paper bag and then a bunch of baby food. Don’t get applesauce. I can’t stress this enough. No one is going to puke eating applesauce, they’ll probably side hug you from happiness. Think pureed beef and meat sticks, quite possibly the grossest thing ever put in a jar. And whatever you do, don’t let any of the meat stick juice spill in your car on the way to the youth group event or you’ll have to ghost ride that car off a cliff immediately.

Then pass the bag around a circle while playing a song. I find a serious song, like “I can only imagine” serves as a nice juxtaposition to the impending silliness that is about to occur. When the song stops, whoever is holding the bag has to eat whatever they pull out. When they inevitably puke, play ‘Friends are friends forever‘ and then stand back and watch the unity you’ve just fostered. Class dismissed.”

Is that how it goes? If you’re a youth minister you can tell me. It’s cool.
Am I the only one that experienced the bag o’ baby food game when I visited a youth group in Houston, Texas?

Did your youth group ever play a gross food-related game?

Previous Post: « Something God never says to us.
Next Post: Short Saturdays – The Twist and 5 Free Books! »