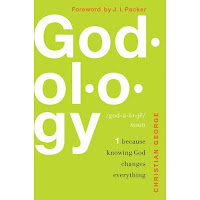 Contest is over. Thanks for entering with some hilarious comments.
Publishers are starting to send me free books, which is cool and is hopefully a trend that will continue until I am able to have a library at home with a rolling ladder that I can sing, you guessed it, Newsies songs from the top of.

But even cooler than that is when publishers give me stuff I can give you. Moody Publishers just told me I could give out 5 copies of Christian George’s new book: “Godology: Because Knowing God Changes Everything

I haven’t had a chance to read it yet because I’m slammed trying to finish my own manuscript, but I have to say I saw something inside it that made me instantly think it might be a good book. I’m of course talking about a quote from Homer Simpson.

Page 76 is completely blank except for a quote from Homer that says “Bart, with $10,000 dollars, we’d be like millionaires! We could buy all kinds of useful things like …love.”

Mr. Christian George, I don’t know you, but you had me at Homer.

Which brings us back to the giveaway.

I’ve got 5 copies of this book to give out. What’s the most ridiculous sign you look for that you’ll like a book? For me it was a Simpsons quote. Is it the cover design, the font, an endorsement from someone else that you already like that makes you think, “I might dig this book?”
With a bajillion books on the shelves these days, how do you pick one you’ll like from just a glance?