(Do you know Brannon Golden? You should, because he’s awesome. I met him and his wife when they said, “You’re speaking in Oklahoma? Come stay on our couch!” Which I did and will continue to do. He also is a master technician at the written word and read through the Stuff Christians Like manuscript for me, helping me with my inability to properly use a colon, an em dash and the words passed/past/pass. He joins us today for a guest post. And he actually included a graphic which is great. Check out Brannon’s idea.)

But Lord, when did we see your trash bins nearly overflowing with half-full coffee cups and discarded bulletins? Matthew 25:39c

LifeChurch.tv, where I attend, offers more options to serve than a season of Lost offers plot twists. To determine which role was the right fit for me, I tried praying and casting lots, just like the disciples did to pick Matthias. But I wasn’t happy with the results, so instead I made a list based upon a sophisticated mathematical model that I won’t bother explaining–not because I don’t think you’d understand, but because I found it on the Internet… and I’m really bad at math. Plugging my selections into the formula handily yielded the following chart: 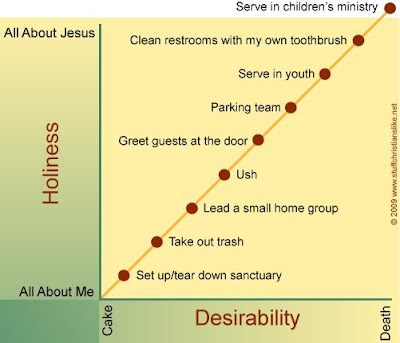 Understand: this is MY chart. Yours would look completely different, based on your gifts. (Also, you may not be as good at Adobe Illustrator as I am.) But if you find yourself upset that serving in children’s ministry is near Death for me, please note that it’s also off my chart on the Holiness scale. So let’s call it even. My wife Kendra, who works for LifeKIDS.tv, feigned irritation at my irrefutably scientific results. (She serves in at least one LifeKIDS.tv experience every weekend.) But I call shenanigans, because she knows I was banned from serving in LifeKIDS after once blacking out during an experience. Turns out I’m not so good with the flashing lights, the noise… and of course the smell of that wintergreen mint stuff they sprinkle on vomit. (And it was Kendra herself who signed the order.)

Anyway, items appearing higher and to the right earn you more jewels in your crown in Heaven. Right now, I’m tracking on a grill nicer than T-Pain’s. (To Jon: You’re welcome.) But I’m cool with just a grill, because I’m the most humble person I know. And I’ll likely live in a nice lean-to cabana near Jon’s pool.

I like setting up the sanctuary because I don’t have to interact with other human beings, and re-stocking offering envelopes and pens in the chair backs suits my OCD. (BTW, in Paul’s big list in Romans 1:28-32, “inventors of evil” means those of you who chew/steal pens and/or pen lids from your church. Consider yourself warned. Is there some enormous black market for stolen pen lids that I’m unaware of?)

Taking out the trash is good for me because I don’t have to interact with other human beings. Perhaps more importantly, since other people are disgusted by it, they think I’m just really holy.

I presently lead a small group in my home. Although that puts me at level 3 on my own scale, I’m not sure what level of Scientology Thetan that would equate to. Having a small group forces me to interact with other human beings (do you see a pattern?). But I think Jesus wants that. Bonus: since we host it in our own home, I can watch TV until the very last minute when people begin arriving.

Although I’ve ushed before, I wasn’t good at it. I was a poor usher not for the reasons you’d think. Yes, I did have to talk to people (which was awkward and uncomfortable for both them and for me). But more importantly, I had to help “receive” the offering and count people. Too much responsibility and pressure.

Some people like the Parking Team because you get to drive golf carts. That’s awesome on the 15 days a year here in the Midwest when it’s 72 degrees. Less awesome when it’s 15 degrees (-7 with wind chill) or 108 degrees, which is every other day of the year. Plus I get enough of people giving me the finger during home group. I don’t need to supplement that with people in a hurry to get out and order water, not smoke, and not tip at our local buffets.

Perhaps one day I might reach that pinnacle of holy servitude and wholly selflessness, wiping noses and leading dance moves for kids. Just not this weekend.