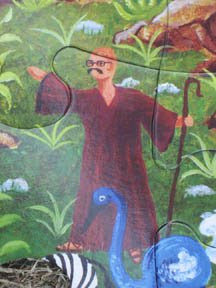 This is a photo of Noah from my daughter’s Noah’s Ark puzzle. Really? Are you kidding me? That’s not what Noah looked like.

A mustache? I’m far from being an Old Testament scholar but I’m pretty sure it was against ancient Hebrew tradition to just rock the stache. Sure instead of Jubilee the Israelites could have celebrated a “mustachio bashio” and that would have been delightful, but back in the day it was all facial hair or no facial hair. The mustache never made a solo cameo.

And glasses? I’m sure they had those back then, but those look like some sort or evolution of the Rob Bell glasses. That guy should be at a Kings of Leon concert, not stepping off of the ark.

But perhaps the craziest thing of all is the curly sideburns. Am I supposed to imagine Noah spent most of his time inside the ark styling those things? “Hmm, too curly. Let me just try a little more tar, there, perfect. Flipped up high enough to say, ‘I’m cool, I like to keep it fun, I didn’t forget to grab the weird animals like the anteater,’ but not so curled that it looks like I can’t handle business. I built the freakin’ ark. Like the Flight of the Conchords, Noah knows what to do when it’s business time.”

Taken together as a package, Noah’s head looks like how I imagine somehow that stockpiles bodies not animals. Creepy.*

If I’m not the only one that does this, let’s play a little game.

If you had to cast the Bible movie, who would you choose for the following roles:

*If you look exactly like this photo, please don’t be insulted. Who am I to judge your head? I have a unibrow. Seriously, if you’re red headed, with glasses, beady little eyes and curled sideburns, we’re cool. Promise.