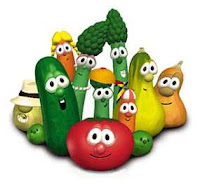 Before I write a short love letter to Veggie Tales let me share 3 things you need to know about children’s television:

1. Baby Einstein is the equivalent of baby crack. Seriously, turn on one and your screaming kid will become comatose as colorful shapes spin and bears dance and toys shimmer across the screen to Mozart. The only issue is that if you’re ever out and about and your kid hears classical music, they’ll start jonesin’ for a fix.

2. The show Caillou will make your kid afraid of everything on the planet. This is the only cartoon character I have ever wanted to punch. He whines and cries and whimpers his way through the entire program. Avoid at all costs.

3. No one knows what the Doodlebops are but trust me, they are terrifying. Their ears are kind of tucked into a flap of skin, they are ungodly good at playing instruments and breakdancing on buses and one of them can shrink his body down into impossibly small spaces.

There, I feel worlds better. But honestly, I love Veggie Tales. It’s creative, imaginative and has enough adult humor to keep me engaged. The best song is the cheeseburger song, there can be no debate on this point, but all of their stuff is good.

My one issue is that when we went to the “Pirates the Don’t Do Anything” movie in the theater, they didn’t start the movie with their theme song. It was like going to see U2 and Bono refusing to do “One” or “Where the Streets Have No Name.” My two year old daughter leaned over to me and immediately said, “Not this veggies.” That’s toddler for, “What a poor branding decision. That theme song is an audio trigger that lets me know it’s time to enjoy some Veggie Tales programming. To leave that song out was a foolish, foolish decision on the Director’s part.” Years from now when my kids are older, they’ll probably think of sweet baby Jesus whenever they even smell a goldfish cracker. I’m sure this is a kid thing, not just a Christian thing, but on about 51 Sundays of the year, that’s what they have for snack. And at our church, if your kid cries a ton, before they flash their number on the video screen in the sanctuary asking you to do the “my kid is out of control” walk of shame, they put them in a wagon and stuff them with goldfish. It’s like this little red wagoned parade of wailing in the halls. Eyes streaming tears, mouth full of fish, tiny hands clutching the side of the wagon counting the minutes until a parent can come rescue them. Good times.

You know what my favorite way to relax is after I’ve put my two kids to bed, especially after they’ve been yelling or fighting with each other using that toddler kung-fu they all know how to do with those tiny little fists? I like to watch complete strangers in Pennsylvania raise 8 kids of their own. Next to Amazing Race, which I call “Amazing Panic Attack,” Jon & Kate Plus 8 is really the least relaxing show on the planet. (One of my worst nightmares is missing a flight at the airport, so watching 12 people do that for an hour is why I can’t watch Amazing Race.) But my wife loves it. She thinks the kids are adorable. She loves the hijinks and shenanigans they are always getting in. And of course she loves that they have Bible verses posted all over the house. If I ever finish my book and become a Christian author “thousandaire,” I am going to throw a really big Halloween alternative event. Christians love those. The most popular format is where you have people get candy out of the trunks of cars in the church parking lot. My event is going to be called “Junk in the Trunk” and I’ll probably be able to get Sir-Mix-A-Lot to come DJ if I pay him like $42 and a bus ticket. Trust me, he’s available. But it’s true, we hate Halloween. Probably because of the witches and the magic and the blood and the zombies. We can’t stand zombies. So instead, we throw Halloween alternative events that teach little kids that there is candy in car trunks. Probably not the safest thing to do, but what can I say, we hate Halloween.

My dad, a minister, should hug the liability forms kids signed before they went on youth group trips. Seriously, is there a harder working piece of paper on the planet? I had a hard time picking just one time that we put that liability form to the test but then I remembered the “snow incident.”

Our youth leader thought it would be funny to have a kid named Sean sled on his feet by holding on to the side mirror of his pickup truck because the snow was so thick. It was hilarious, like a moment out of Dawson’s less attractive creek. For extra kicks, my youth leader decided to run Sean into a small tree on the side of the road. When he hit the tree though he fell at an odd angle. He slipped back toward the car and with a sickening bounce, the rear axle rolled over him.

We skidded our van to a stop and ran to where Sean lay screaming in the snow. He was grasping his knee. It wasn’t bloody. There wasn’t a bone sticking out but he was definitely in horrible pain. As he yelled, he started to curse, which given the situation was fairly understandable. Out of circle of people around Sean I heard one of our youth leaders say, “Sean, language please.”

There aren’t any strangers in Lonesome Crick. In a town that small, everyone is either family or friend. Everyone knows everyone else and there’s a sense of kindness that permeates the town like a vein of cinnamon running it’s way through a delicious loaf of raisin bread. But this morning was different, because on a horse as black as night, a man was riding into town. With a beard that said he’d spent the night out in the open and a glint to his eyes that seemed sharp and dangerous, he slowly rode into Lonesome Crick. Who was he? Was he safe? Probably not, because you knew he was bad to the core. Because, because … he was smoking a cigarette. What did he want with Lonesome Crick?

Click here if he’s hiding out from a posse who is chasing him.

Click here if his family died and he’s running from the hurt. I haven’t read the last Harry Potter book so if he forsakes magic and becomes a Christian at the very end and this shouldn’t be on the list at all please don’t tell me. But until I do read the book, “the end of the Harry Potter series” needs to be item #30. It’s the magic. We don’t like that. The witchcraft. The sorcery. It’s having your little kid come home and say, “I learned a new spell on the playground” that freaks us out. But to tell you the truth, Harry Potter is such small potatoes compared to some of the things kids get exposed to on the internet by the time they start first grade. How come we don’t get all that riled up about that? Not that people are cool with that kind of thing, but there were protests against the Potter series, and rarely do you hear anyone marching against internet explorer for weak filters.